How meaningful are 360° reports? Let’s try to interpret the following comment:

“‘He’s successful in interfacing with clients we already have, but as for new clients, it’s low-hanging fruit. He takes a high-altitude view, but he doesn’t drill down to that level of granularity where we might actionize new opportunities.’” (Page 277 of the award-winning novel Station Eleven.) 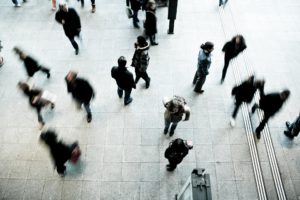 The trigger for this realisation is that he has just interviewed someone who has been completely honest in her appraisal of her manager. She says, “…the corporate world is full of ghosts…who’ve ended up in one life instead of another and they are just so disappointed.” She describes her manager as a “high-functioning sleep-walker” who thinks, “…work is supposed to be drudgery punctuated by very occasional moments of happiness…” … “Guys like Dan, they’re like sleepwalkers…and nothing ever jolts them awake.”  (Pages 164-165.)

While the first quotation is unconstructive criticism dressed up in a melange of clichés to the extent that its meaning is almost lost, the second quotation is very personal. We can imagine how we would feel if we were the ‘targets’ of these reports. Both would be painful to read and neither would give you any useful guidance to work on. Nor would the reports be of much use to the organisation.

There is a better way.

Frederick Funck has proposed a case for moving executive coaching beyond personal development (or even personal criticism) to professional development linked to the goals of the organisation.

He says, “…we see how coaching helps individuals and teams increase performance and satisfaction at work, and on the other hand we see organizations struggling with strategic leadership challenges that are common regardless of industry, region or size.” The implication is clear given Funck’s finding that 40% of leadership transitions fail.

Funck proposes three steps to put an executive coaching strategy into the context of the goals of the organisation, by integrating research into the process:

All good executive coaching must be more than personal development, and we welcome the use of research and evidence to link coaching to an organisation’s goals.

There are two key implications for 360° reports. The first is the need to customise the report and be specific. We need to get a clear understanding, explicitly expressed, of the goals of the organisation and of the actual job the person undergoing the performance review does. The second is that we need to understand the level of performance expected of the person being reviewed.

Then, to assist both the person and the organisation, we need to understand exactly what it is that our client is supposed to be doing.

Is she supposed to be improving the performance of her team? If so, in what ways is her team not performing sufficiently well and what should they be doing differently?

Is he expected to bring in new clients? If so, what is his business target?

Does she need to enhance her communication skills? With whom, in which media and to achieve what organisational purpose?

Finally, while the most commonly used 360° rating tools are often designed to elicit robust feedback, it is the personal comments made by subordinates, peers and managers that people take most to heart. Perhaps we should consider asking reviewers to tie their comments far more explicitly to the role the person is employed to perform – and preferably in plain English.

What do you think?

Dr Catherine Burrows is a Founding Partner of Executive Coach Exchange and the CEO and owner of Innoverum independent consulting. She is an accredited Hogan Assessor and is qualified to administer and interpret the Hogan 360° multi-rater feedback tool.