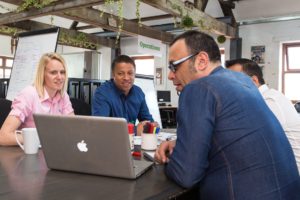 In Part 1, we looked at the difference between people who are obstructionist and people who are true sceptics. In Part 2, we are looking at how sceptics can help you implement your change.

Learning how to listen and who to listen to are skills leaders need to master. Combined with effective staff communication, they form an extremely powerful skillset, one which executive coaches can certainly help you to build and enhance.

Without these skills, a leader trying to implement organisational change can quickly find themselves in deep trouble. Which of these scenarios would you rather be part of?

Scenario 1: You are in the middle of a media storm, defending your recent changes, and one of your staff says, ‘”We told them ‘sh*t’, that’s not going to work when they explained how the computer was going to do the work and said that it was going to misrepresent people’s income and lead to incorrect debts going out, but they just told us “computers and data can’t be wrong”.

‘”They…weren’t interested in hearing what we thought about it.”‘ (“‘They don’t care about average Australians’: Centrelink staffer speaks out about debt controversy.” Sydney Morning Herald, 11/1/2017)

Scenario 2: A member of your staff keeps protesting about a new approach. They say, ‘”I still don’t like the idea.”

Working with early adopters, the champions of your change, is exciting and rewarding. These are the people leaders trust to get things done. They understand your ideas and see your imperatives. People who get on board make your life easier and make it seem that everything will go smoothly.

In contrast, dealing with sceptics is time-consuming. Their failure to see what you can see, the advantages of your ideas, can be frustrating, irritating and dull. They make your life more difficult and seem determined to find every possible impediment to your change.

When you are working to a tight time-frame, the need to move things along can seem like the most important priority. However, if you don’t get it right, you can find yourself in the middle of Scenario 1, defending a system which, it appears in this case, is not working. Worse still, based on the media report, the public will assume you knew it wouldn’t work and didn’t listen. This assumption may not be correct but, unfair or not, this is what people will remember.

In contrast, in Scenario 2, you have outlined your proposal for change and invited feedback. You have listened carefully to the opposing view and demonstrated you have considered it. You have shown you respect the staff member’s right to disagree. Nevertheless, you have decided to proceed. This is powerful because, if you communicate this properly, your staff member will know their view was taken into account.

What is more powerful is that you have authorised your sceptic to help you get it right. All this takes time but, if you consider consulting the sceptics as being like ‘beta-testing’ rather than finding barriers, you’ll know you have a better chance of getting a better outcome.

There is one further stage in embracing the sceptics. Leaders often focus on the negative response of sceptics and question their motivation. However, few leaders question the motivation of the champions. Because their response is so positive, leaders tend not to ask why champions are eager to get on board. Is it because they can see your true genius? Or is it a case of “Always back the horse named self-interest, son. It’ll be the only one trying.” (Jack Lang)

An executive coach can help you step outside the situation, observe from different angles, and identify your own motivations and those of your team members before acting.

In Scenario 2, the leader goes on to say, “Thank you for being the only sensible one in this group and insisting on telling me.” The sceptic replies, “We’re a team.” (Ryan, ibid.)

It may be a difficult process – but how much more effective your change will be when your sceptics have tested it from every angle and let you know, however grudgingly, that with a few modifications it will work.